The defense deal, effective immediately, was one of a series agreements the two countries signed to enhance their military and economic partnerships, including a second defense pact with options valued at up to $350 billion over the next 10 years.

“It was a tremendous day,” Trump said while meeting with Saudi Crown Prince Muhammad bin Nayef at a Riyadh hotel. “Jobs, jobs, jobs,” the president said in a reference to the potential job creation opportunities the agreements provide.

The White House said in a statement earlier that the defense deals would create new opportunities for U.S. companies in the Middle East and support “tens of thousands” of new jobs in the U.S. defense industry. 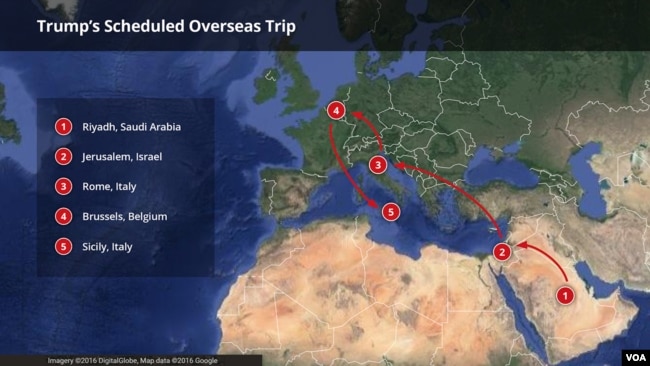 “This package of defense equipment and services supports the long-term security of Saudi Arabia and the Gulf region in the face of Iranian threats, while also bolstering the kingdom’s ability to contribute to counterterrorism operations across the region, reducing the burden on the U.S. military to conduct those operations,” the statement said.

Included in the defense agreements is a $6 billion pledge to assemble 150 Lockheed Martin Black Hawk helicopters in Saudi Arabia, which is expected to result in the creation of 450 jobs in Saudi Arabia.

Additionally, American conglomerate General Electric said Saturday that it had signed $15 billion in agreements with Saudi organizations. Saudi Aramco said it expected to sign $50 million in deals with U.S. companies in an attempt to diversify the kingdom’s economy beyond oil exports. 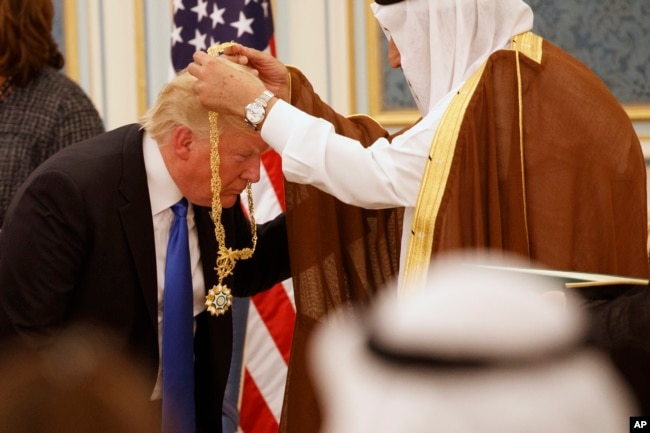 After Trump and others entered the court to the music of bagpipes, King Salman decorated him with the gold King Abdulaziz al-Saud Medal. 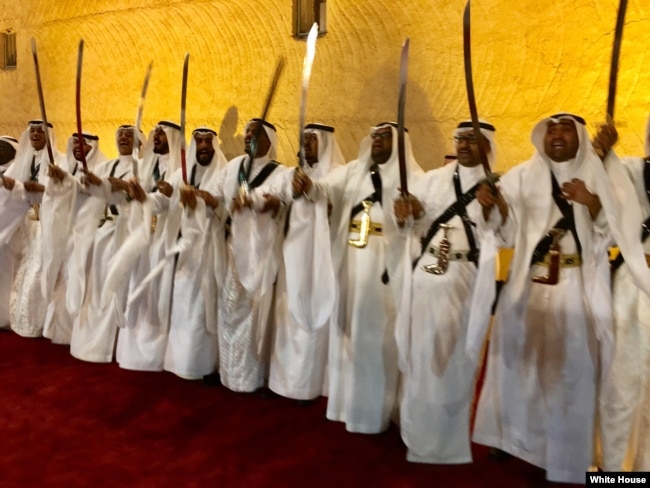 Saudi men, dressed in traditional garb and holding long swords aloft, perform a traditional war victory dance of the Nadj region. President Donald Trump and first lady Melania Trump walked past them into a small museum on the grounds of Murabba Palace in Riyadh, May 20, 2017. (Pool photo)

Trump arrived in Riyadh on Saturday to begin his first foreign trip as president.

King Salman greeted the president and his wife at the airport. They walked along a red carpet into the Royal Hall, a terminal at the airport, where they talked briefly. Minutes later, the Trumps and the Saudi king left the airport in a motorcade, heading to the city along a route with deserted streets. 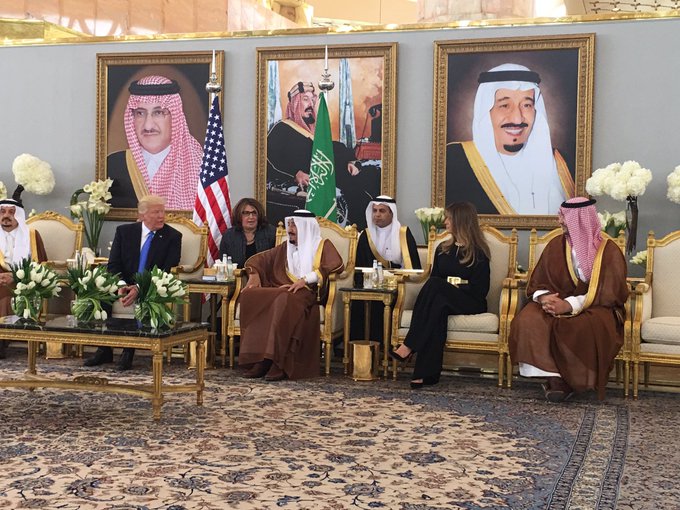 King Salman also rode to the hotel with @POTUS, following their sitting for arrival photos at the airport.

Heavy security was evident at the airport, including military vehicles with weapons.

Saudi Arabia is an unprecedented destination for an initial overseas visit by a U.S. president.

It is all the more surprising in the wake of Trump’s “America First” focus and campaign statements calling for a “Muslim ban” backed by subsequent orders attempting to limit travel to the U.S. from several Muslim-majority countries.

Saudi Arabia, which has deep, long-standing energy and defense ties to the United States, was not named in the travel bans. 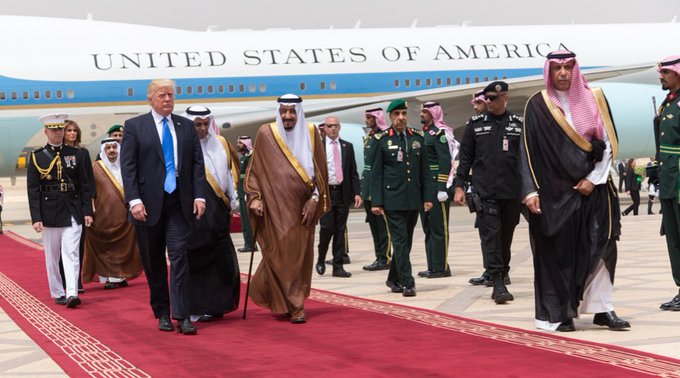 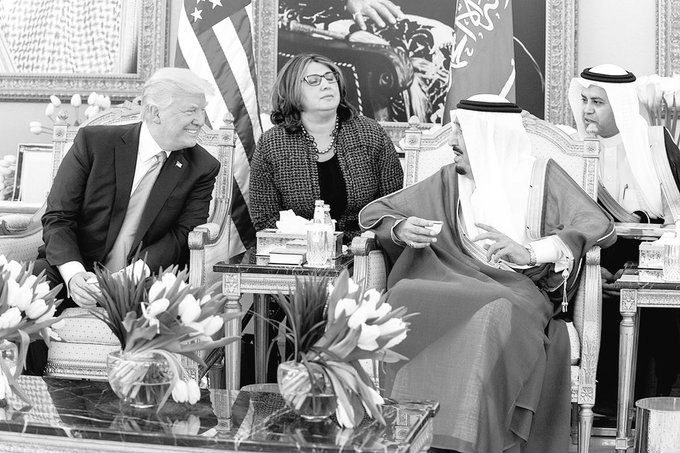 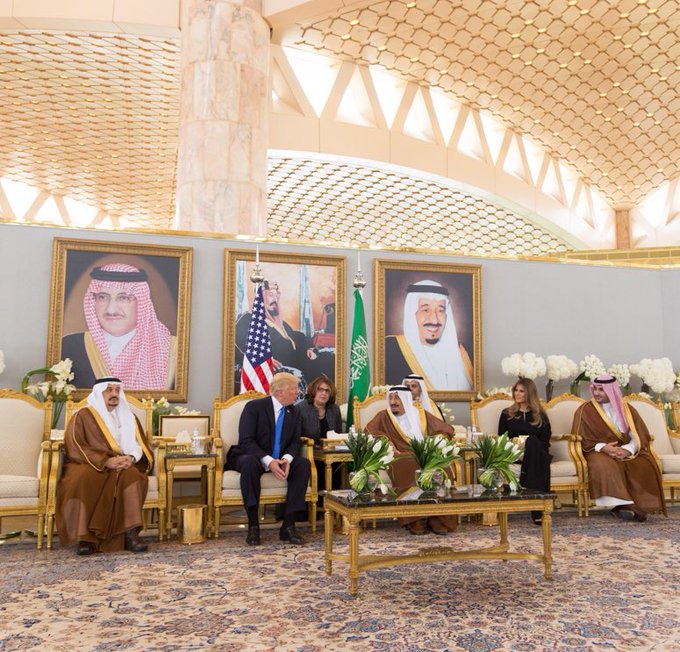 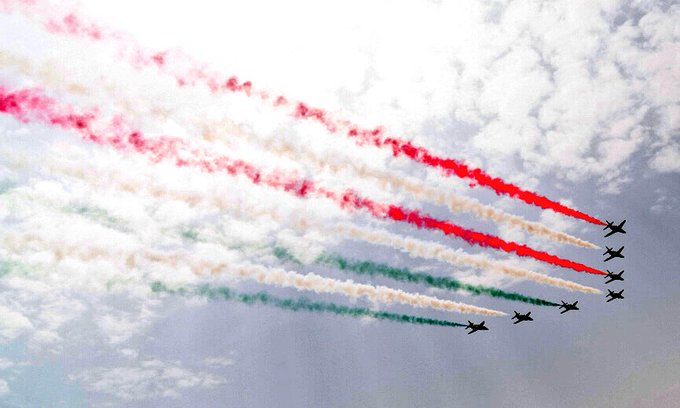 Great to be in Riyadh, Saudi Arabia. Looking forward to the afternoon and evening ahead. #POTUSAbroad

Trump spent much of the first day of his trip meeting with King Salman and other members of the royal family before an evening banquet. On Sunday, he will meet with dozens of Arab and Muslim leaders for a regional summit focusing on combating extremism.

Indonesian President Joko Widodo confirmed Friday that he would attend the meeting. An Indonesian government spokesman said, “We see this as an important meeting because it is the first time a meeting between the new American government and Islamic countries is addressing issues that are of concern to us all, especially regarding the fight against radicalism and terrorism.”

Trump, confronted by growing political scandals at home, intends to use the visit to portray his administration as a global leader by helping birth an alliance with like-minded Muslim leaders to combat “radical Islamic terrorism” (Trump’s phrase and one the Saudis do not want to use).

“It lays to rest the notion that America is anti-Muslim,” Saudi Foreign Minister Adel al-Jubair told reporters this month. 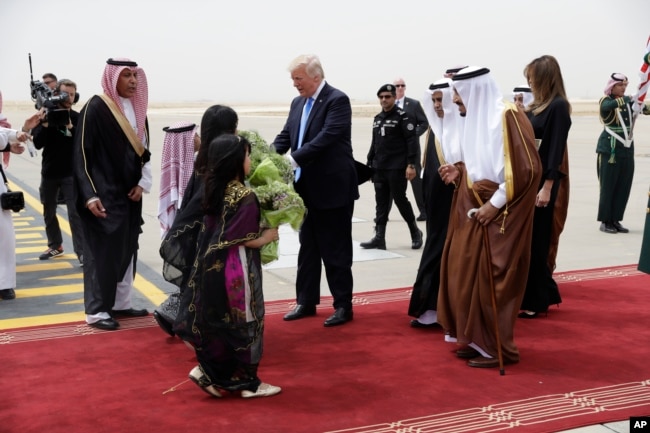 President Donald Trump and first lady Melania Trump are greeted by King Salman shortly after arriving at the Royal Terminal of King Khalid International Airport, May 20, 2017, in Riyadh.

“It’s very important that the president is reaching out to Muslim-majority countries in the world, and trying to identify who our friends are and work with them to beat our common enemies,” Democratic U.S. Representative Thomas Suozzi of New York, a member of the House Foreign Affairs subcommittee on the Middle East, told VOA. “We have to recognize that most of the Muslims in the world are peace-loving people, who have strong faith and want to have a harmonious world we need to embrace.”

A shared vision with the Gulf Cooperation Council and Organization of Islamic Cooperation to enhance the battle against the Islamic State group and al-Qaida could be interpreted as putting Trump squarely on one side of the Sunni-Shi’ite ideological schism in the Muslim world.

The Saudis are Sunnis (Islam’s majority), while Iran is dominated by Shi’ites. 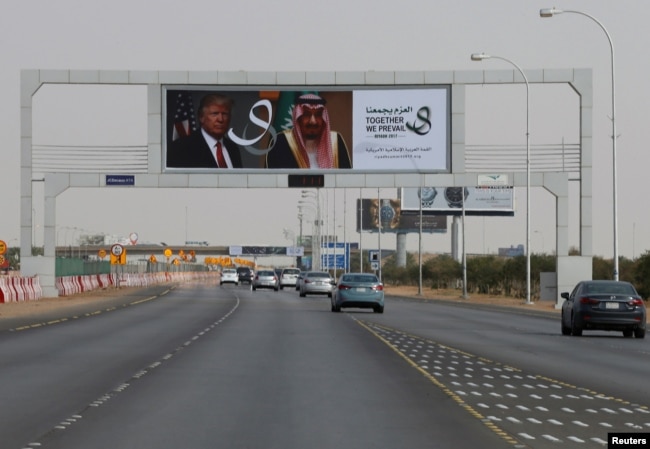 Saudi Arabia and Iran support rival proxy forces in conflicts throughout the region, including in the two significant civil wars in Yemen and in Syria, where the embattled forces of President Bashar al-Assad are backed by Tehran and Moscow.

The Middle East analyst added that the attempt to forge new alliances among anti-Iran regional powers is occurring because “the biggest threat they see after ISIS [Islamic State] is Iran — and ISIS never goes away because of Iran.”

While administration officials say Trump is a strong believer in human rights, they acknowledge this will not be a significant topic of discussion here.

“If countering violent extremism is a priority for this administration and it wants to defang this ideology, then Saudi Arabia is a very odd partner for that project,” Sarah Leah Watson, Human Rights Watch Middle East executive director, told VOA. “The Saudi government and its policies are among the biggest sources of violent extremism.”

To demonstrate their earnestness for an even closer alliance with Washington, the Saudis are hosting a social media forum where Trump is to deliver a speech Sunday to the Muslim world.

In addition, the Saudis are organizing a counterterrorism conference, opening a center to “fight radical thought.”